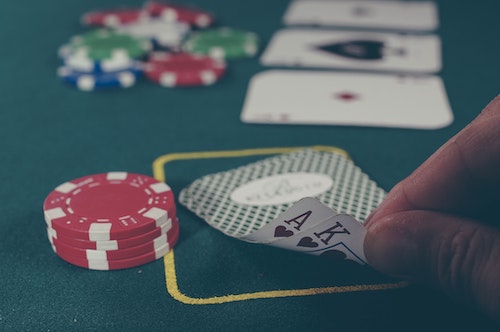 Are you willing to risk it all for the chance of a high return? Or do you prefer to play it safe? Could DNA influence how you place bets?
By
Genomelink team
‍

Are you willing to risk it all for the chance of a high return? Or do you prefer to play it safe? Broadening out from what we discussed for the Discovery Trait from early this month (Susceptibility to Framing), this week, we’ll be examining the genetic factors that affect how you place your bets when you gamble in general.

Although we now know that how information is presented can drastically change our decision-making, some people are just naturally more comfortable placing bigger bets than others. Why is this? Adding onto the COMT gene we covered for the Susceptibility to Framing trait, we’re turning our attention to another actor involved in the brain’s reward pathway for the possible answer: the cannabinoid receptor 1 (CNR1) gene. Changes to the CNR1 gene (in particular, being homozygous for the C variant, which is when both copies of the CNR1 gene are the C variant) have been previously associated with addictions to alcohol, marijuana, and heroin.

Qin and colleagues in their 2018 genome-wide association study recruited Chinese undergraduate students to assess how their genes influence their performance in a series of gambling tasks. At a specific gene locus of the CNR1 gene, those who were homozygous for the C variant placed statistically higher bets than those who only had one copy of the C variant CNR1 gene. Interestingly, in a further analysis, Qin and colleagues found that the CNR1 gene was very highly expressed in certain parts of the brain that are known to be involved in reward and risk processing. Taken together, these findings suggest that a single mutation may play a significant role in changing the mechanisms of perceiving risk and rewards, which ultimately can shape decisions. Isn’t this fascinating? Read more on the study here: https://www.ncbi.nlm.nih.gov/pubmed/30546300

Of course, this study, which recruited fewer than 400 people of the same age and ethnicity, has its limitations. Despite this, however, the results are consistent with what we already know about the CNR1 gene and give us further insight of how even the tiniest changes to our genes can influence our behavior.

So how is your DNA influencing how you place your bets? Log onto Genomelink to find out!

Photo by Michał Parzuchowski on Unsplash