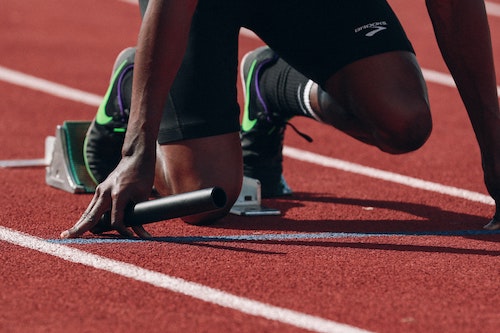 Could your DNA reveal your Sprint Performance? Upload raw DNA data to learn more about yourself and genomics science.
By
Genomelink team
‍

It’s almost that time again...you know...the once-every-4-years sporting extravaganza that showcases the most elite athletes in the world. Tokyo 2020, of course! The Olympics are right around the corner, which means we may soon find out whether anyone can beat Usain Bolt’s record for the world’s fastest runner. Track events are some of the most-watched, but what is it about running that draws so much attention? Maybe a better question is how exactly elite athletes are able to run so fast, and how do they set themselves apart in such stiff competition? New research suggests there may be genetic factors that impact a person’s sprinting speed.

In the first ever genome-wide association study (GWAS) evaluating sprinting speeds, researchers identified several single nucleotide polymorphisms (SNPs) that may play a role. This research was conducted in 3 different study populations: Caucasian British football (soccer) players, elite Russian speed and strength athletes, and healthy Polish women. Participants all provided DNA samples and completed various performance tests to evaluate their acceleration and speed capabilities. Additionally, the participants from Russia provided samples of their muscle fiber to determine its composition. Collectively, these results were cross-evaluated with the genetic variants of several genes, 12 of which were found to be associated with increased sprinting speeds.

Of these findings, perhaps the most significant was the association between the G allele of the MORC4 gene (SNP rs12688220) across all replication cohorts in both sprint performance and elite sprint athlete status. More specifically, the presence of this SNP was over-represented in sprinters compared with controls or endurance athletes in the Russian power athlete study. Furthermore, the G allele increased proportion of fast twitch muscle fibers in Russian subjects who had undergone muscle biopsies as a functional analysis. Interestingly, this SNP has previously been associated with pancreatitis, with the G  allele protective against the development of both acute and chronic pancreatitis. This locus is implicated in the control of ion and water channels between endothelial cells, and expression appears to increase after both injury and stress. At present, unfortunately, the mechanism of its effects on sprinting capabilities has not been investigated.

Although the initial sample size of 48 may not be large enough, additional cohorts of athletes and controls as well as functional analysis increased the accuracy of the results. Further studies are needed to replicate these findings in athletes of different ethnicities to understand the mechanisms of genetic contributions to sprint performance. If you’re keen to learn more about these results, check out the full study here: https://www.ncbi.nlm.nih.gov/pubmed/31343553

Login to your Genomelink dashboard now to find if you are genetically predisposed to increased sprinting performance!

Photo by Braden Collum on Unsplash