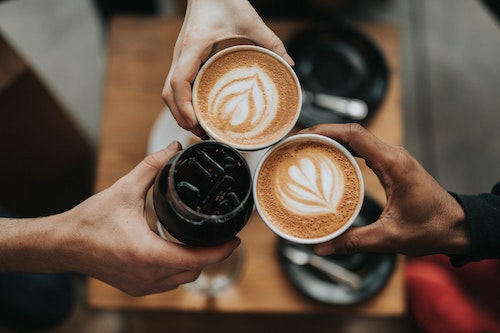 Learn More About Your Genetic Tendency For Coffee Consumption

Could your DNA reveal your Coffee Consumption? Upload raw DNA data to learn more about yourself and genomics science.
By
Genomelink team
‍

For many people, there is nothing better than rolling out of bed and enjoying a fresh, hot cup of joe. With an average of 100 milligrams of caffeine in each cup, it wakes up your brain and boosts your energy. However, it has been reported that coffee or tea consumption can reduce the risk of several diseases, such as type 2 diabetes, cognitive decline and specific cancers. Although, high rates of caffeine consumption has also been associated with adverse pregnancy outcomes. For example, the World Health Organization (WHO) says “for pregnant women with high daily caffeine intake (more than 300 mg per day), lowering daily caffeine intake during pregnancy is recommended to reduce the risk of pregnancy loss and low birth weight neonates.”

Given the widespread consumption of various types of beverages and their substantial health implications, understanding environmental and genetic factors contributing to beverage choice and consumption levels have important nutritional and broader public health implications. It has been reported that taste perception and preferences are heritable and play a role in beverage choice and consumption. A recent Mendelian randomization analysis reported that bitter perception was causally associated with coffee, tea and alcohol consumption.

In this study, researchers conducted a two-stage genome-wide association study (GWAS) of  self-reported consumption of bitter- and sweet-tasting beverages. Genetic and phenotypic data from over 370,000 adults of European ancestry was collected first from the UK biobank (stage 1), and then three additional US-based cohorts (stage 2). Coffee, tea, grapefruit juice, red wine, liquor and beer were classified as bitter beverages, while non-grapefruit juices and artificially and sugar sweetened beverages (SSBs) were classified as sweet beverages. Significant associations of fifteen independent SNPs spanning 10 loci were replicated from stage 1 to 2 for coffee consumption. Although rs9937053 in FTO gene, rs8056750 in HYDIN gene, and rs116094457 in RNF166 gene were not among those replicated, the joint analysis (stage 1 + stage 2) showed at least nominally significant relationships with coffee consumption. Overall, strengths and directions of SNP-phenotype associations were similar across total bitter beverages, bitter non-alcoholic beverages and coffee, based on joint meta-analysis. The association between FTO variants and coffee consumption shown in the study is supported by a recent Mendelian randomization study which reported that a BMI-increasing allele in a gene with FTO was associated with higher coffee consumption.

In the study, strong environment effects (e.g. demographic, social, occupational, cultural and others) may have masked genetic effects but replication of results from a UK population to a US population
enhances generalizability and reduces false positive results. Genetic variants related to coffee consumption may play a critical role in bitter or sweet beverage consumption. Whether genetic variants related to taste perception are associated with beverage consumption remains to be determined. Read more about the study here: https://www.ncbi.nlm.nih.gov/pubmed/31046077

Are you interested in learning more about your genetic tendency for coffee consumption? You can login to your Genomelink dashboard to see this new genetic trait.

Photo by Nathan Dumlao on Unsplash