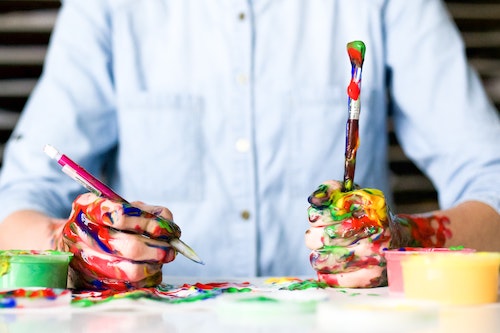 Could your DNA reveal your Figural Fluency?

Could your DNA reveal your Figural Fluency? Upload raw DNA data to learn more about yourself and genomics science.
By
Genomelink team
‍

Who do you picture when you think about creative people? You may think of widely known artists who have impressed audiences for decades or entrepreneurs who have made great achievements under difficult situations using limited resources. Creative people are not as special as you may think because you may find these people all around you, or you might even be a creative person without realizing it! In general, creativity refers to the ability to produce something that is both novel and useful. When we are creative, we come up with new ideas. Numerous business-related blogs mention how to improve your creativity, suggesting that creativity may be an important factor in measuring your skills.

It has been reported that creativity is closely related to human development and achievement at both the individual and societal level. Despite its importance, the underlying mechanism of how creativity works is not completely understood. A great number of neuroscience and cognitive studies have reported that the involvement of dopamine (DA) transmission is a critical component in the cognitive processes of creativity. Hence, genes in DA transmission have been of particular interest to explain individual differences in creativity. Amongst these genes, the catechol-O-methyltransferase gene (COMT) and dopamine D2 receptor gene (DRD2) have been studied most extensively. The enzyme encoded by the COMT gene is involved in the inactivation of catecholamine neurotransmitters, such as DA and noradrenaline, and is the main factor controlling DA levels in the prefrontal cortex of the brain. The DRD2 gene encodes one of five DA receptors and plays an important role in mediating synaptic DA signaling. Variants of these two genes have been repeatedly implicated in creativity-related cognitive functions, such as working memory and cognitive control.

A group of researchers led by S. Zhang (2014) reported novel DRD2 SNPs and haplotypes which are associated with creative potential measured by divergent thinking (DT) tests in the Han Chinese population. To understand the genetic variants covering these genes thoroughly, the researchers systematically investigated the association of COMT related genetic polymorphisms with creative potential using the same approach, DT tests that are commonly used to estimate creativity, in the same sample. In this study, SNPs covering COMT were genotyped in 543 healthy Chinese college students. For the figural DT test, three line drawings were represented and participants were asked to list as many things as each drawing could be. Four minutes were allowed for each task and all tasks were scored for fluency, flexibility and originality according to the guidelines of the Creativity Testing Service. Briefly, the fluency score was obtained by counting the number of unduplicated responses given by each participant, while the originality score was calculated by counting the number of unusual responses. By comparing genotype and DT test scores, results showed that two SNPs in the COMT gene, rs737865 and rs5993883, were related to figural fluency. Participants with at least one copy of a C allele in rs737865 and a G allele in rs5993883 showed increased figural fluency scores. In addition, the rs737865 SNP was also associated with figural originality.

This study provides preliminary evidence for the involvement of COMT in creative potential. Although this is the largest such study to date, the moderate sample size was not as large as would be ideal. Moreover, the generalization of these findings to other populations might be limited as genotype distribution patterns vary greatly across ethnic populations. Thus, further prospective studies using larger sample sizes and replication studies in other ethnic populations are warranted to confirm these suggestive findings. Read more about the study here: https://www.ncbi.nlm.nih.gov/pubmed/24782743

Are you interested in learning more about your genetic tendency for figural fluency? You can login to your Genomelink dashboard to see this new genetic trait.

Photo by Alice Dietrich on Unsplash