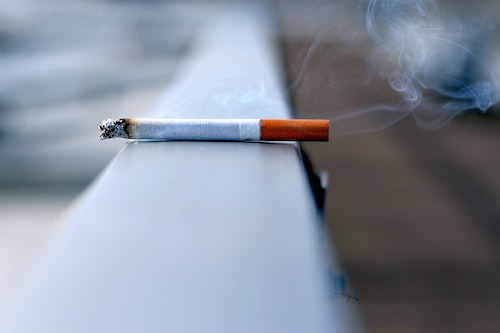 Could your DNA reveal your Smoking at an Early Age? Upload raw DNA data to learn more about yourself and genomics science.
By
Genomelink team
‍

Can DNA reveal your Smoking at an Early Age?

Everybody knows that tobacco kills, so why do people start in the first place? Peer pressure, depictions in popular media, and marketing (especially of products such as e-cigarettes) all play very large roles, but, from previous Traits, we know that genes matter, too. And there’s another fascinating pattern: the majority of adult smokers say that they started during their teenage years to early adulthood. So this week, we’ll be looking at the genetic factors underpinning smoking at an early age.

Using genetic samples from a group of around 150 Mexican smokers, Perez-Rubio and colleagues investigated gene variants that are associated with starting to smoke cigarettes early (before 18 years of age) versus starting to smoke when they are 18 or older. They looked specifically at small mutations in four genes that have previously been found to be related to cigarette smoking and nicotine addiction, and used self-reported data on when participants began smoking. The investigators found that a specific gene locus on the 5-hydroxytryptamine receptor 2A (HTR2A) gene was statistically significantly associated with smoking at an early age: if you have the CT or TT genotype, you have a higher risk of smoking cigarettes at early ages. The HTR2A gene codes for a receptor for serotonin, which is a molecule released in the brain that gives you feelings of happiness (as well as serve other important functions). Isn’t it fascinating that small change to your DNA could tweak your likelihood of smoking your first cigarette before your 18th birthday? To learn more, read the full study here (and be sure to check out their additional analyses on the genetic factors of smoking cessation treatment!): https://www.ncbi.nlm.nih.gov/pubmed/30738094

Of course, this study is not without its issues (for example, it involved a very small sample), but the findings suggest some promising directions for future research. (Note that it is also possible that, because the sample size was very small, there may be other gene variants undetected in this investigation that are actually significantly associated. So there is much more work to be done!) It would be interesting to scale the study up to include other ethnic groups as well.

Are you ready to know if your genes are tempting you to start smoking early? Check out Genomelink now!

Photo by Andres Siimon on Unsplash

Smoking at an Early Age