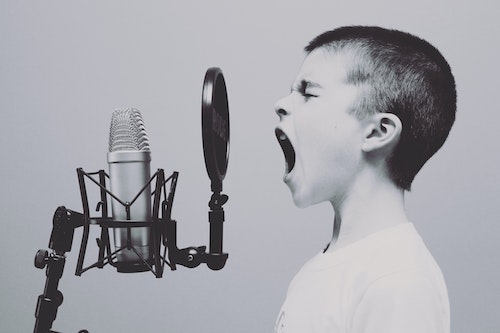 Are you interested in learning more about your genetic tendency for voice-breaking age? You can log in to your Genomelink dashboard to see t
By
Genomelink team
‍

Boys between 9 and 14 years of age grow and develop dramatically. This transitionary period from boyhood to manhood is called puberty. It represents the process by which sexual maturation takes place and reproductive capacity is acquired. The common symptoms in the early stages of puberty are gonadarche, or testicular enlargement, and pubarche, which is the development of axillary (armpit) and pubic hair. A voice break (VB), often called a voice change, generally refers to the lowering in pitch of a person’s voice, and it tends to be one of the later events in the pubertal transition. Previous studies in twins, different ethnic groups, and family studies have suggested that 50 - 80 % of the variance in pubertal timing may be genetically controlled in girls as well as in boys.

In boys, genome-wide association studies (GWAS) of pubertal timing have used mostly self-reported proxies, such as age at voice break and pubertal height growth. A GWAS on the initial clinical milestone of male puberty, i.e. testicular enlargement, is not available since testicular size is not regularly assessed in most large-scale epidemiological studies. Consequently, fewer and smaller studies on male pubertal timing exist compared to studies on female pubertal timing. In addition, VB represents a late-stage event in the pubertal transition and is physiologically very different from early events like gonadarche and pubarche. In this context, researchers examined whether a polygenic risk score (PRS) based on genetic variants associated with age at voice break (VB) is also associated with early pubertal markers such as age at gonadarche (AAG) and age at pubarche (AAP) in a cohort of healthy Chilean boys.

In this study, GWAS summary statistics for relative timing of VB (n=154,459) based on the UK Biobank cohort study were used to calculate the PRS for puberty timing. In the UK Biobank study, the age of VB was divided into three categories: “younger than his peers,” “about average age,” and “older than his peers.” The GWAS summary statistics revealed that 29 independent single nucleotide polymorphisms (SNPs) were significantly associated with the relative timing of VB. These significant SNPs included rs4728218 near the MKLN1 gene, rs7032296 near the RP11-158D2.2/HNRNPK; RMI1 gene, rs12003641 near the ZNF483 gene, and rs8081915 near the AKAP1 gene. The calculated PRS was associated with AAG and AAP, suggesting that VB and the two early pubertal events share an overlapping genetic architecture in the Chilean boys. The effect of genetic signaling with an advancing or delaying effect on average VB have the same direction in the appearance of pubic hair.

Recently, a study suggested that there is a strong genetic correlation between male puberty timing assessed by the time of voice break, and BMI and adiposity traits such as body fat mass, hip circumference and leg/arm fat percentage. In addition, based on a Mendelian randomization approach, a recent study identified a causal effect of BMI on timing of voice break in boys. Although the study described above does not reflect a shared genetic architecture between BMI or adiposity traits, 3 of the 29 independent loci, MC3R, BDNF, TNNI3K, have been identified as associated with obesity susceptibility in different populations. This observation argues in favor of some variants that have an effect on the timing of pubertal onset and also control body composition. Read more about the study here: https://www.ncbi.nlm.nih.gov/pubmed/31915828

Are you interested in learning more about your genetic tendency for voice breaking age? You can login to your Genomelink dashboard to see this new genetic trait.

Photo by Jason Rosewell on Unsplash