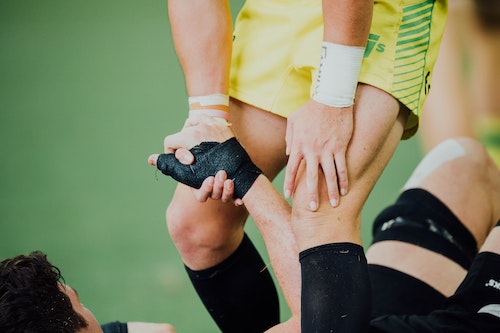 Could your DNA reveal your Anterior Cruciate Ligament Ruptures? Upload raw DNA data to learn more about yourself and genomics science.
By
Genomelink team
‍

It is well-known that regular sports and physical activities are important to maintaining our health, but it is also true that all sports carry at least some risk of injury. Injuries to the anterior cruciate ligament (ACL) of the knee commonly occur during pivoting and cutting sports. Unfortunately, this injury is not without severe consequences as the ACL never fully heals and studies report between 10% and 90% of all patients develop premature osteoarthritis.

Studies have shown that the angiogenesis signalling pathway plays an important role in the healing process of an ACL. Thus, dysregulation of this process may potentially have negative consequences on tissue capacity. The angiogenesis pathway is regulated by several growth factors and cytokines; principally the vascular endothelial growth factor (VEGF). In particular, the A isoform of this protein, encoded by the VEGFA gene, is considered to be the most potent. Kinase insert-domain receptor (KDR), encoded by the KDR gene, is the main signalling receptor for VEGFA and mediates the mitogenic and chemotactic actions of the ligand.

Researchers conducted a case-control genetic association study on 100 controls and 98 patients with surgically-diagnosed ACL ruptures including with non-contact mechanisms of injury (NON). All participants were genotyped for five functional polymorphisms in the VEGFA gene and KDR gene. The results suggested that the GG genotype for rs2071559 (KDR) was associated with a 2.8-fold increased risk of ACL rupture (all mechanisms of injury) and a 3.3-fold increased risk of non-contact ACL ruptures in the male participants. Additionally, the AG genotype was associated with a 1.9-fold reduced risk of ACL rupture in male participants. The rs2071559 polymorphism (A→G) is known to reduce KDR transcription and lower the protein level of the receptor, resulting in reduced activity of VEGFA which regulates the angiogenesis pathway. Therefore, insufficient angiogenic response following mechanical loading may potentially impair the ability of the ligament to adapt and heal, thus resulting in weakened tissue. Moreover, it has been reported that individuals with copies of both alleles (AG) may potentially be able to better regulate the biochemical response to loading without the detrimental consequences of having either too much or too little protein.

It has been reported that females tend to have an increased risk of ACL ruptures, however, the sample size of female participants (n=17) was not sufficient to show the sex-specific genetic association clearly due to the method of recruitment. Although some other limitations also need to be considered, this is the first study implicating polymorphisms within the KDR gene with an associated risk of ACL ruptures in a South African colored population and successfully identified the association between the rs2071559 polymorphism and risk of ACL ruptures in male participants. Read more about the study here: https://www.ncbi.nlm.nih.gov/pubmed/28502223

Are you interested in learning more about your genetic tendency for anterior cruciate ligament ruptures? You can login to your Genomelink dashboard to see this new genetic trait.

Photo by chuttersnap on Unsplash